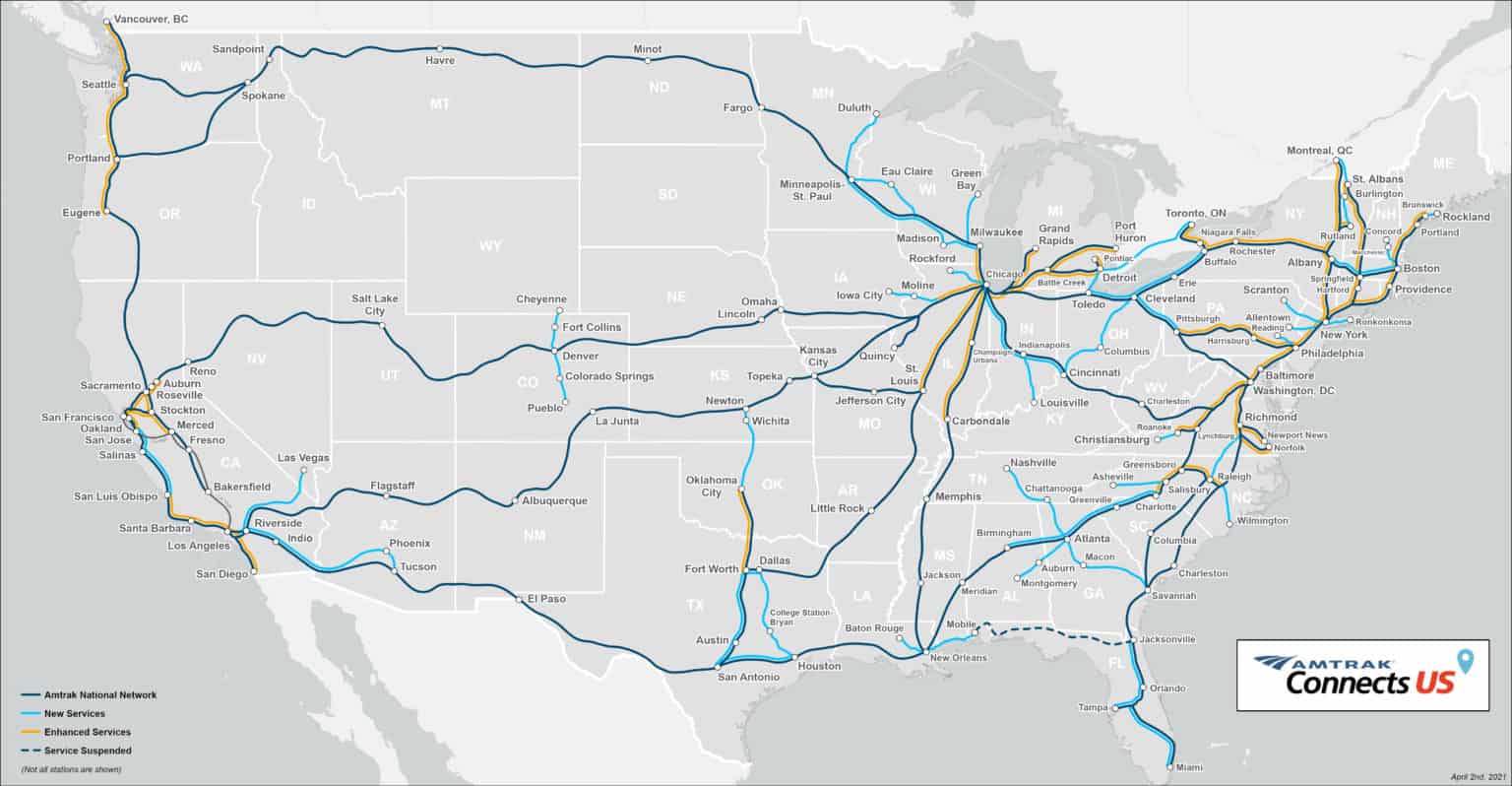 1. Creating billions of dollars of economic growth across the country and thousands of good paying jobs.

WASHINGTON – Amtrak is initiating the work to deliver by 2035 more frequent, reliable and sustainable intercity passenger rail service to over 160 more communities and 20 million more passengers annually, as outlined in the Amtrak Corridor Vision released today. To be implemented in collaboration with states, local communities, the administration and many other stakeholders, the Corridor Vision builds upon Amtrak’s national network, integrating new and improved corridors to expand the existing system.

“Now is the time to invest in our country’s infrastructure and future,” said Amtrak CEO Bill Flynn. “New and improved rail service has the ability to change how our country moves and provides cleaner air, less traffic and a more connected country.”

Amtrak’s vision to grow rail service across America includes 39 potential new routes and more trips or other enhancements on 25 existing routes, creating the potential to expand or improve rail service for 20 million additional passengers each year. The plan calls for improved service in major cities currently underserved by rail like Houston, Atlanta and Cincinnati and new intercity passenger rail service to cities such as Las Vegas, Nashville, Columbus, Phoenix, and Wichita, with increased access for many towns and cities in between.

The economic benefit of Amtrak’s Corridor Vision is expected to reach $8 billion annually by 2035, with an additional $195 billion in economic activity generated by additional capital investment during 2021 – 2035. More than 26,000 ongoing permanent jobs plus 616,000 person-years of employment supported by capital investments during 2021-2035 will be created or supported by this vision.

Additionally, this plan offers a significant opportunity to reduce emissions. Travel on Amtrak trains outside the Northeast Corridor (NEC) emits up to 55% fewer Greenhouse Gases than driving alone, and up to 30% fewer than flying.

In a letter to Congress, Amtrak highlights what it will take to achieve this bold vision.

Information about the national plan can be found at AmtrakConnectsUS.com

This would be especially true in Texas as more than 1,000 new residents move to the state every day. Expansion of train service between Texas towns and cities would result in economic growth for the areas served and additional jobs as Amtrak would beef up service in corridors generally under 300 miles.

Amtrak President Stephen Gardner and CEO Bill Flynn call the Heartland Flyer expansion project a high priority, both saying it would add between 100,000 and 200,000 riders annually and have an estimated $64.8 million annual economic impact.

Amtrak, which has right of access to all railways in the U.S., would need to work with freight railroads to add capacity such as additional track, signals and other infrastructure improvements.

A presentation October 15, 2021 by Amtrak Government Affairs indicated that, with federal support, Amtrak would pay for up-front infrastructure needs on any new corridor service. Federal operating support for new corridor service could be up to the following share of state operating costs for the first 6 years of service:

By this means the up-front costs of getting the service started would be bourn by Amtrak. As ridership and revenue build over the first 6 years, the state would start picking up the share of operating support. It’s a win for states that want passenger rail service but can’t afford the large upfront costs.

3. Letters of support from elected and appointed officials