On the third day of the investment and trade mission to Japan, Houston Mayor Sylvester Turner, Greater Houston Partnership President/CEO Bob Harvey, and members of the delegation learned more about the Japanese company that is the model for plans to develop a bullet train between Dallas and Houston.

The engagement began with a Texas Central update on the status of the proposed Houston - Dallas bullet train project. Representatives explained that the landscape changed since March 2022, when the company underwent a restructuring effort, and the future of the high-speed train remains bright. Texas Central has assembled a world-class team to construct the system and reached regulatory milestones.

Developers of the private sector Texas project say high-speed rail would provide a safer, more comfortable passenger experience that is more efficient and environmentally friendly than driving or flying.

In July 2022, the company won a significant victory when the Texas Supreme Court affirmed the status of Texas Central as an "interurban electric railway" under Texas law.

Following the briefing, the delegation connected with Japan Central Railway for an exclusive tour of the Shinkansen control and training centers, followed by a ride on the bullet train from Tokyo to Mishima, Japan. Over the Shinkansen's 50-plus-year history, carrying over 10 billion passengers, there has not been a single passenger fatality or injury on board due to train derailments or collisions, according to the JRC. 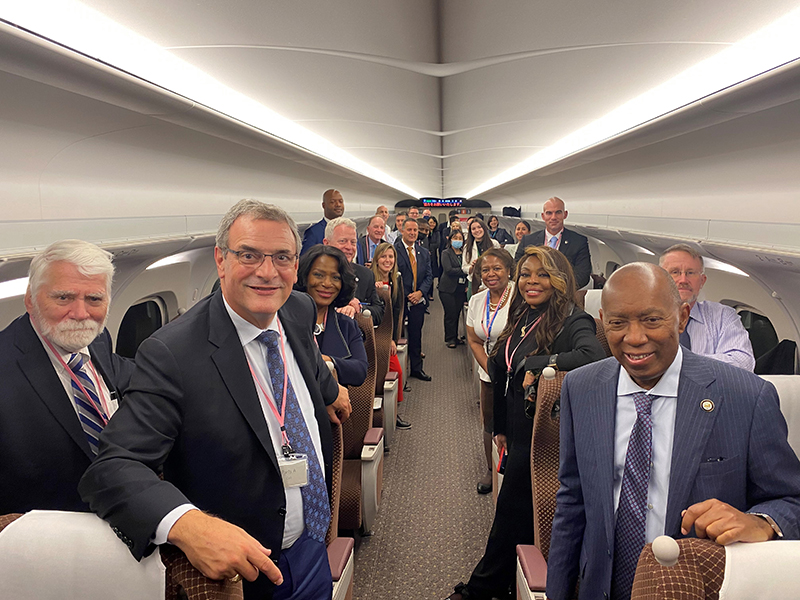 "Many of us were very supportive of the high-speed train before we came here, and what we have seen has reinforced our position. In Texas, it can be transformational and an economic stimulant for the entire state. It is an idea whose time has come for Texas and the United States. It would help improve transportation and mobility, and if people could ride it now, they would be convinced of the benefits for their families and the business community," said Mayor Turner. "We had some very productive and constructive discussions about the train in Japan. The leadership in Houston is very supportive and wants it to happen. I look forward to working with Texas Central and our state and federal partners to advance this project. If you build it, people will take full advantage of it."

Earlier in the week, the delegation met with Japan's Vice Minister of Land, Infrastructure, Transport and Tourism who pledged full support for the Texas bullet train project.

BNSF closes out 2021 with record earnings